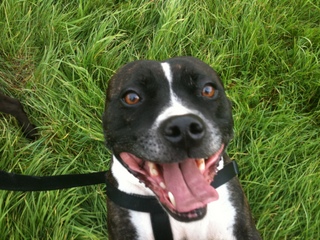 Ever known a dog to be scared of the moon? I wanted to tell you all about my first ever dog i had book into my walks. Todd a lovely 9 year old staffie who still enjoys walks with us each week.

Todd came to me at about 1 year old after being at the Bristol cats and dogs home for a little while. His owners were looking for a dog and fell in love with him.

Todd was one of Alfies best pals; they spent many walks together and Todd generally looking after Alfie. They became very good friends and shared years of Great Dane meets and fun walks together.

Todd taught me all about retractable leads and how dangerous they are, one drizzly day I was walking him with Alfie at his local park in Arnos vale Bristol. Todd lives for rollies and zoomies; which is probably why he and Alfie got on so well! So Todd decided to do a zoomie then a rollie whilst on the retractable lead and took my right off my feet and into the mud. I have fallen over a few times in this job but this had to go down as the worst, I had mud right up my back onto my neck under my clothes and still had a full day of walking to do with no spare clothes. This also taught me to be prepared!!! There is now a team phrase that has stuck since this day “you are not a real dog walker unless you have fallen over in the mud” This day with Todd’s help I became just that! One walk with Todd the heavens opened and off he ran up a huge steep hill which I couldn’t run up as fast, as much as I tried to keep up I literally had no chance especially with 2 other dogs in tow. I panicked, this was my very first experience of a dog ever running away in my care, and this probably should have frightened me enough for me to stop walking dogs. Anyway I am out of breath on the phone to his owners still trying to get up this hill toward his house. When I arrive at the top no sign of Todd. I run to his house and there he was sat on the doorstep looking at me as if to say ‘what took you so long’.

Todd was the only house guest that ever slept in with the children, he loved their bedroom and felt happy and safe in there so whilst the children were babies in a cot Todd slept in with them, is it true what they say about staffies being nannies to children? Who knows… But Todd adored the babies and loved the nursery. Well unless there were any fireworks. Todd came into board one day just before bonfire night and the fireworks were awful that year. I actually ended up with 9 dogs on my bed at 11pm and they stayed there until the morning, I must have had about an inch of room as Alfie was one of the 9. Todd was really spooked easily by noises fireworks were not the only thing, the naughty bread maker at his home was so scary it had to go upstairs in a separate room and the moon would make him uneasy! Todd on Dane Group Walk Todd used to be our honorary Dane at the southwest Dane meets I used to organise coming to quite a few he grew very fond of Danes since meeting Alfie. The Ashton court meet was the funniest 12 Great Danes and Todd somewhere amongst them, I think I still have a photo of this which I will share.

Just before the company had any staff I was pregnant with my first child Jacob and I will never forget this- each time I got pregnant and was around 20 weeks I would have someone with me to walk the dogs just in case and this one particular day Sue (my mum) and I walked at Paulton with gadget Gusto, Sammy, Alfie and Todd. Todd got a bee in his bonnet and legged it down the steep hill in timsbury, I could run very fast so both sue and I chased down the hill well I was more like waddling down the hill and then got to the bottom by the gate where Todd just stood looked at me and zoomed back to the top…. This was not a fun game and I remember it taking some time to get back up the hill toward the van.

Despite Todd’s noise issues he still enjoyed his walks and outings to the beach with us and although hes 9 he still loves a good zoomie! Todd taught me many things and for this I am very grateful; thank you Todder’s and owners for choosing me!